Regular readers of this blog know that Klondike choose to ignore his recall command on Wednesday, the day before Thanksgiving. Happy to report that by Thursday he had decided to redeem himself.

Of course, his tail is still going to Extreme Recall starting tomorrow. 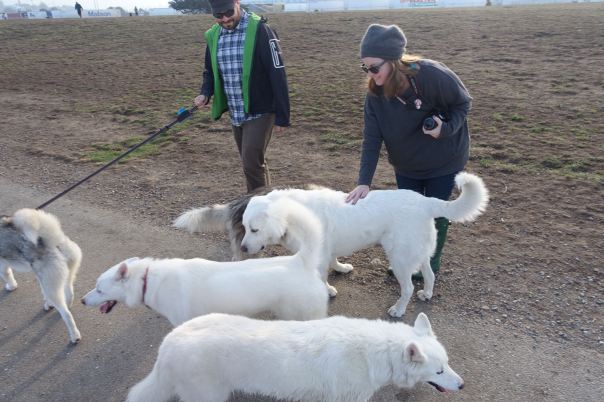 Welcome to the Point Isabel version of Where’s Waldo!

Quick!! Which one is Klondike?

(answer: the one getting attention from a random stranger, of course!!!!) 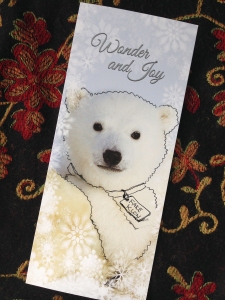 Yesterday wasn’t a very good day Klonwise. In fact, though it started well (breakfast with an old and dear friend who was staying with us), it wasn’t a great day period.

I was at home around 11:00am when a certain lovely wife went out. Leaving a pan on the stove. That created lots of smoke. That set off the smoke detectors. That caused me to open the windows and doors to ventilate  the house. Open doors the KlonBeast used to explore the world. Yea. I parked him in the backyard while tried to confirm all we were dealing with was smoke from the stove and opened windows to clear the smoke. Told him to stay and somehow thought, maybe since he understood the command, thought he would. No such luck.

Probably a minute after I parked him in the backyard, after I’d opened a few more windows and turned off the stove,  I went back to make sure he was still there. Not seeing him I did what any rational dog owner would do:  Left the house  with all doors open wide and possibly a fire to see if somehow Klondike was in the front of the house or maybe across the street. Nina and Ron, our wonderful neighbors, reported seeing him,  calling him and having him come up to their front porch before taking off again. I looked down the street to see a distant, large, white furry dot with a curly tail near the end of the  block. Of course I called him. And I know Klondike heard me because he looked over his shoulder, probably laughed, before picking up his trot. Long story short, I sprinted for three long blocks as fast as I could go, calling the beast and being ignored, watching him cross a moderately busy street and run parallel to a very busy one before I, with help from a random guy, captured him.

But wait, there’s more. As soon as I got back to the driveway neighbors were gathered, Mieko was just coming back from shopping and Chris, Klon’s walker, had just pulled into the driveway. Thought about denying Klon his Point Isabel walk as punishment but since he wouldn’t have understood, and Chris was already there Klon, get his walk with her. Where hie slipped off his collar and jumped into an ocean inlet for an unauthorized swim. The good news is when done apparently he ran back to her. But he’s definitely discovered the joy sticking it to the man.

This morning I took him to the dog park (mainly to burn energy before Thanksgiving guests) and guess what? He initially blew of my recall. I put him on leash and did a few recall exercises (calling him, then running backwards when he came, then giving him a cheese treat) and he did a little better. A little. But as you can see from the video, not great.

Happily, we have a solution. BravoPup, two of whose classes, taught by the great Katy, we’ve taken. BravoPup has an Extreme Recall class starting 12/1. Five weeks of learning Come in the most distracting, difficult circumstances. We go through this  and hopefully it will be a while before I have to worry about a burning house with an open front door while I chase a dog that thinks running from me and into heavy traffic is a great game.

And on a happier note.. Happy Thanksgiving Everyone!!! And for all my kriminal complaints, I know how lucky we are to have Klon, and lots of other great things, in our life.

A good Sunday morning for the Klon… high intensity Point Isabel romp with lots of swimming and tag, a visit to his favorite place in the world, Pet Food Express on Telegraph, and then a large pre-lunch bone.  Check out the pirate dog video! 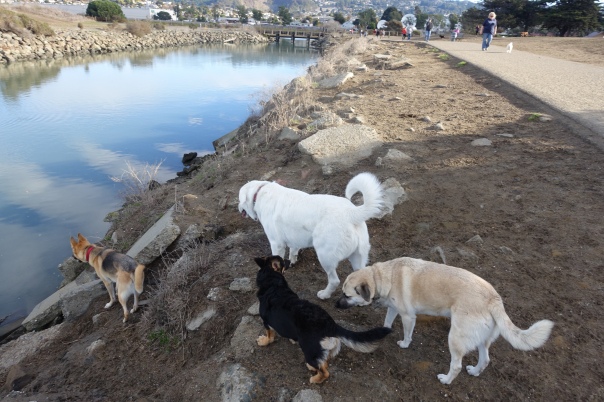 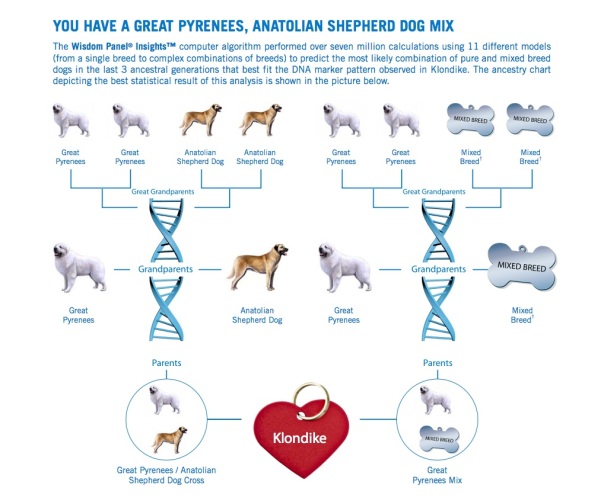 OK, not the full recipe –  they left out the secret Klon sauce.  But $65 on Amazon buys the Wisdom Panel test kit, which gives a pretty full genetic analysis of your dog’s heritage, together with weight expectations and notes on temperament. Here’s Klondike’s full genealogy and breed notes.

The process was quick and painless. Set up an online account, swab the dog’s cheeks, dry the swabs, mail in and wait for your results. Mine came in about ten days. Here are the directions.

There was a bit of a front end glitch… the sign up web page wasn’t working exactly right (wouldn’t let me correct an address) and the “Welcome to Wisdom Panel” email had a line of machine code where my name should have been. But those are pretty small issues. I absolutely recommend Wisdom Panel to anyone with the slightest interest in learning more about their dog’s heritage.

Klondike barked at what we think was a cat on the fence. Rude cat! It’s his yard! And this little incident is worthy of a newsflash because he never barks. In the 4 months we’ve lived with him, we’ve heard him bark only twice. This is the 3rd. He usually doesn’t care who walks along the fence. Was that Klondike? He barked! Bill and I ran out to the yard to look at the dog. Maybe like proud parents. Or something. 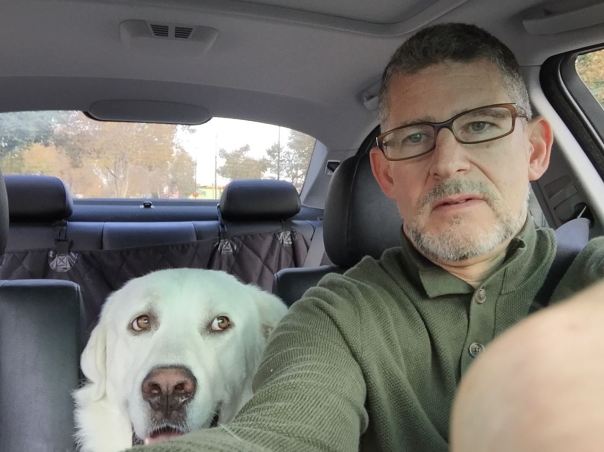 We love Good Citizen Klon. He’s a great dog and his basic obedience behaviors are pretty solid. By he’s also (largely) a Pyrenees, and Pyrs work solo. They don’t herd in collaboration with a shepherd or another dog, they guard.  Pyrs hang out with the livestock and use their own judgement about what’s a threat and how to handle it. The good news is they have a mind of their own. The bad news is, you guessed it, they have a mind of their own.

I decided to take Klondike to the Berkeley Marina last night, as much for me as for him. GCK already had a medium morning walk with Mieko and Chris took took him Point Isabel late morning.  However, having spent the last few days out of town I wanted a long walk and to spend some time with the beast. And it was a beautiful night, very dark but clear and crisp.

First two thirds of the walk were great. I enjoyed seeing the port of Oakland off from the Marina, and city of San Francisco beyond that.  Klon went off leash and had some great pick-up games of tag with some other dogs. Lots of trotting, running, sniffing and smiles. And when recalled KlonBeast came running like a fur covered freight train, much to my pride and perhaps a little envy from the other owners.

Problem started when we turned vaguely toward the parking lot and the Klon decided to slow walk. He’s pretty much 100 pounds and if he chooses to walk at 1 MPH to protest a wrong direction you can’t do much. This was a fairly significant issue a few months ago, right after we adopted him. We worked on this and the behavior greatly subsided, even went away. But there it was last tnight.

To train him off dragging we mainly did two things

Last night when he started dragging he got praise and occasionally one of Mieko’s Klon Cookies (beef, cheese, peanut butter). And we got to the car somehow, but it was far more work than it should have been.

So… this morning Klon skipped breakfast (not his idea, I assure you, but I wanted him a bit hungry) and I took him on the same walk as last night, hoping he’d resist in the same place. And he did, though not nearly as much.  And this morning, every time there was a bit of slack in the leash after he’d been dragging or he trotted to catch up with me he got some of his super special cheese. My nuclear training weapon. He got a lot of cheese but I’m hoping not to have to this conversation with him again for a while. Let’s keep our fingers crossed. And yes, he also got breakfast later. 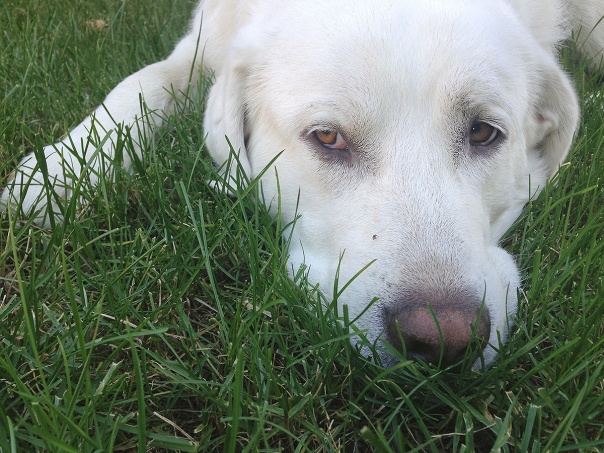 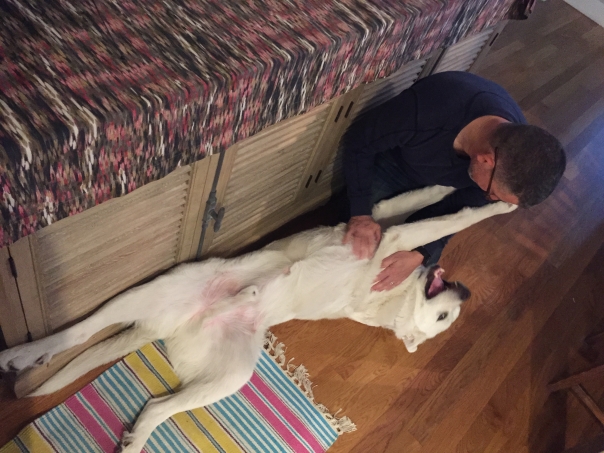