We’ve been feeding raw food to Mr. Klondike for maybe 2.5 years now. Bill and I don’t even think about it any more, but every now and then we surprise our friends and family.

They all ask the same questions, so I’m answering them here, as the person running Mr. Klondike’s catering department.

Do not underestimate a dog’s digestive powers! Mr. Klondike even likes his meat a little ripe, as in old, and I think it smells more interesting that way. He likes his food fresh, too. He likes everything. He takes his morning eggs raw, cracked into his bowl.

What about people? Isn’t it dangerous for the people around your dog?

No one has become sick here, so it seems quite all right. Of course, I am careful with the storing and handling of raw ingredients, and would never guarantee that it is perfectly safe in every case.

Again, do not underestimate a dog’s digestive powers! When Mr. Klondike swallows a big piece of bone, most of the time his poo does not contain the bone. It just gets a little whiter and crumbly if the bone is big. When we do see small bone fragments, they are rounded and tiny. Although, I should emphasize that cooked bones are a different deal, and I hear they do not melt away the way raw bones do. We only give him raw bones.

It must be expensive!

This is mostly a matter of choice. Even in the SF Bay Area where the cost of living is ridiculously high, we can easily find people grade meat under $1/lb. On the other end of the spectrum, there are stores that sell exotic meat for raw fed animals for over $15/lb. There are other creative ways to get raw food, like getting to know your butcher. On the web I read wonderful stories like getting a whole roadkill venison, raising chickens and rabbits for food in the back yard, getting extra cheap fish at the port. So it really is a matter of choice and a little creativity. Mr. Klondike needs a little more than a pound of meat and bone each day.

What about nutritional balance?

I’m not even sure what people really should be eating, and I certainly do not claim to know what is best for my dog. But we don’t need a scientist to tell us that it’s probably mostly meat and bones, he can also eat a wide range of other food, and that he needs variety. That’s common sense.

The switch for Mr. Klondike from dry to raw was mostly my intuition. I have read books and articles that support it, but a lot of dogs seems to thrive on commercially available food too, so raw is probably not the only way. That said, there were so many visible health improvements that I can’t imagine I’d ever switch him back to kibble.

The best ratio of meat, bones and organs is said to be 8:1:1. There should be variety in the kind of animals they come from, and 10-20% vegetable matter is also recommended. There is no shortage of resources on the web for those interested. I follow the guidelines loosely but pretty consistently. 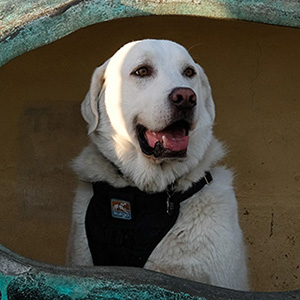 This is the face of that very dangerous raw fed dog and he weighs about 100 pounds. The killing instinct… I’m not sure I’ve seen it. He loves to have his tummy rubbed. Before raw, he was always very hungry. Almost restlessly asking for food. After raw, he is the relaxed Mr. Klondike we know. That’s the only character change we have noticed.

Do you travel raw?

We leave home with a backup bag of kibble, but there are supermarkets everywhere. It’s not hard at all.

Maybe I should try too with my dog/cat?

The best thing to start with is chicken wings. The very tip of the wings, that part is not bone, it’s cartilage. It’s not going to be dangerous even for small dogs. Some animals need time to get adjusted, so I’d recommend transitioning slowly. Swap part of what you have been feeding to chicken wings. Then gradually increase the size of the bone. Feed more of it. Then try other meats and organs. There are people who have had success feeding 100% raw from day one, without any problems. Then there are other people whose animals just wouldn’t stop having digestive issues. Know your animal, and keep a close watch.

So… That’s about it for now. Hope this page answered your questions. If you need to know more, just do a couple of Google searches.